Edge Analytics Engine (EAE)
The EAE engine is a runtime environment hosted in an EG i.e. at the edge of a FAR-EDGE deployment. It is the programmable and configurable environment that executes data analytics logic locally in order to meet stringent performance requirements, mainly in terms of latency.

From an implementation perspective, EaSpecs can be represented in different forms such as:

Specifically, the EaSpec includes the information needed to drive the operation of the EA-Orchestration, including for example the attributes and sequences needed to setup the required jobs on the EA-Processor.

Pre-processors, analytics processors and store processors define three different types of functionalities that are supported by the EAE i.e. pre-processing, analytics and storage of streams. Given these processor types, a specific instance of Edge Analytics (EA) is implemented by setting up multiple processors, which are connected in a graph-like fashion thus forming a topology. The topology is specified in the EaSpec, which will be represented as a smart contact. Moreover, the topology and overall process are controlled by the EA orchestrator. 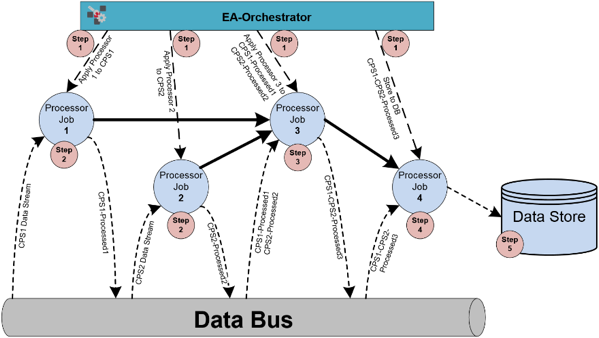