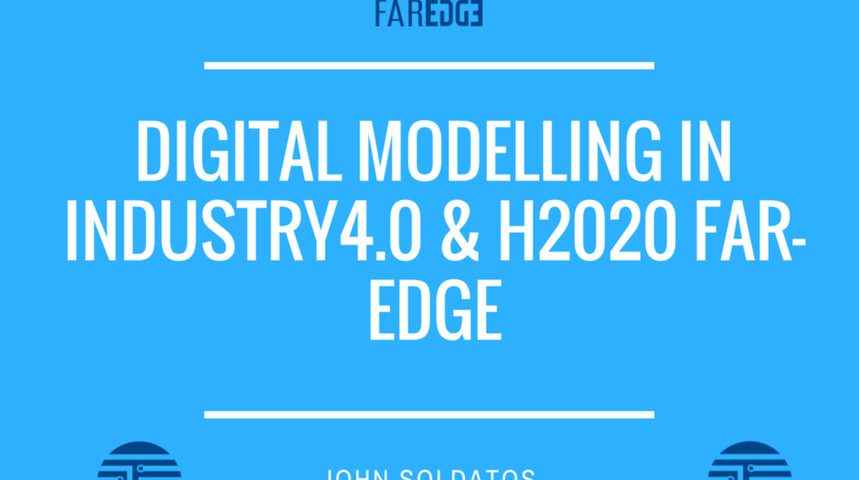 This article addresses the digital modelling which is one of the key concepts of the fourth industrial revolution and one approach to the FAR-EDGE project. It was posted on LinkedIn network by the Internet-of-Things expert and member of the FAR-EDGE consortium John Soldatos and is also available here.

The digital modelling of the physical world is one of the core concepts of the digitization of industry and the fourth industrial revolution (Industry 4.0). It foresees the development of digital representations of physical world objects and processes as a means of executing automation and control operations, based on digital operations and functionalities (i.e. at the cyber world). This concept is conveniently called “digital twin” and is a key enabler of the digitization of industrial processes. There are some nice YouTube videos that illustrate the concept.

Digital modelling in Industry4.0 serves (among others) the following three complementary and important objectives:

In our H2020 FAR-EDGE project we take advantage of the digital twins concept, based on the integration of digital models that represent the manufacturing shopfloor, along with physical and logical components comprising the project’s edge computing approach to digital automation such as edge gateways. In particular, the FAR-EDGE Reference Architecture (RA) and platform design specify a set of digital models as an integral element of the FAR-EDGE automation platform.

Following a review a number of standards based models (i.e. digital models and schemas specified as part of Industry 4.0 standards) against their suitability in supporting FAR-EDGE requirements, we have selected and highlighted AutomationML and the standards based schemas that it comprises (such as CAEX) as a baseline approach for specifying the FAR-EDGE digital models. We are also extending the AutomationML/CAEX process with some additional concepts that pertain to the FAR-EDGE edge computing model to automation and distributed data analytics. Specifically, we have created a digital model that reflects concepts specified and used as part of the FAR-EDGE RE and the edge computing infrastructure of the project, such as edge gateways, data channels, measurement devices, as well as live data streams. These concepts can be blended with AutomationML and CAEX concepts as a means of putting plant models (e.g., CAEX instances) in the context of FAR-EDGE edge computing deployments.

We will be shortly publishing details or our modelling approach in research papers. However, I will soon provide another post with the main standards reviewed by the FAR-EDGE project as candidates for supporting its digital modelling approach. If this sounds interesting, feel free to connect and keep in touch.