Each Component is positioned and belongs to precisely one Functional Domain or XC Function, which defines its functional scope and to one Tier, which determines some constraints for its physical deployment.

Some Components play the additional role of enabler.

Hence enablers are defined in terms of a standard technical specification that any Platform implementation should comply with and be open and royalty-free.

Strict adherence to these rules is mandatory to build an efficient and sustainable industrial ecosystem on FAR-EDGE results so that commercial-grade implementations of the Platform should not break compatibility with any existing FAR-EDGE system.

In the distinction between Enablers and Components, the latter are implementation-specific, meaning that a full FAR-EDGE Platform implementation might efficiently be targeting vertical sectors.

For instance, a set of Components like the Ledger Services – which are necessarily scenario-specific at the very least – can be provided as part of the underlying Platform, to be customized for similar use cases by its users. The Platform reference implementation, which is one of the primary outcomes of the FAR-EDGE project, is a perfect example, as it includes several Components that have been developed to support the project’s pilot solutions. The complete list of Enablers in FAR EDGE is: 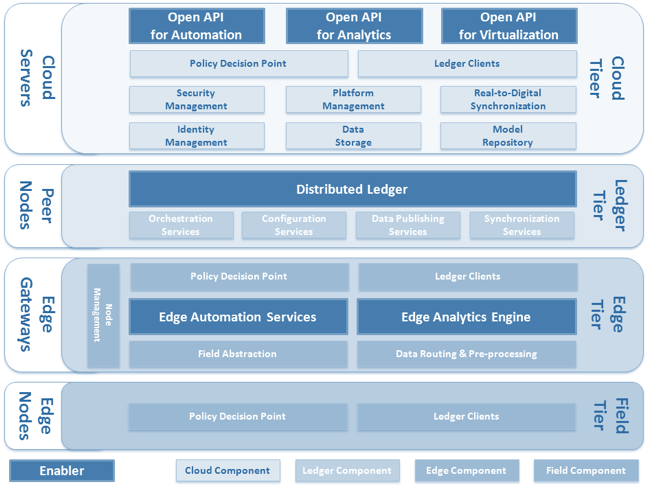 Diagram of FAR EDGE components and Enablers (in dark blue)