The Ledger Tier is a logical layer of the FAR-EDGE Platform that allows for truly distributed process logic to work in use cases that require some level of coordination – as is true for most industrial scenarios – without any centralized service being in charge of it, by leveraging the distributed ledger and smart contract patterns, which are both key elements of Blockchain technologies. 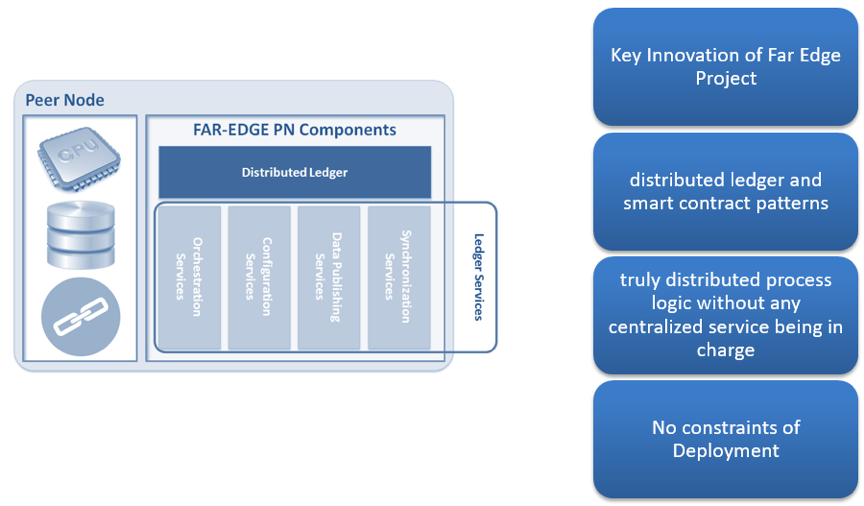 The ledger stores and maintains the shared state of distributed processes: global variables and even complex data structures that are read and written concurrently by business logic running on any Tier of the FAR-EDGE Platform – typically on EGs. Such state is secured by cryptographic techniques, so that records in the ledger cannot be modified or removed once created, unless there is a system-wide unanimous consensus on doing that.

A majority consensus of PNs is also required for the creation of every new record, which constitutes an atomic transaction. The logic for assessing the validity of transactions is itself defined by a consensus of all stakeholders: it is a smart contract – i.e., executable code that implements a deterministic algorithm – deployed on the ledger. This means that the coordination of distributed processes is not only decentralized, but also dynamically (re)definable according to changing needs.

The ideal clients for this, perform frequent reads and infrequent writes of the shared state, the latter based on fast and simple logic. In other words, only highly valuable data should be persisted on the Ledger Tier.

In the FAR-EDGE Platform, smart contracts are how Ledger Services are implemented. The runtime environment for smart contracts is a Platform standard, so that compliant Ledger Services will be portable across Platforms. The Distributed Ledger Enabler depends on the Identity Management Component in the Cloud Tier for the certified digital identities of clients.